“It’s mostly flat” Ryan told me when we planned our first cycling holiday, a three day tour around Mull.  When Ryan convinced me and Megan to Cycle the 70 miles to Chester, “it’s mostly flat” he said.  You may have noticed if you’ve read the other posts already on this blog that neither of these routes are flat and that therefore….Ryan lies. 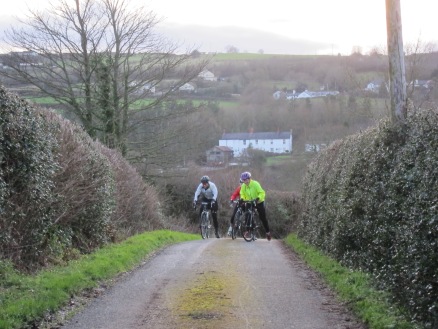 Now don’t worry, I may be only an arts graduate but I’m not that stupid that I think the Alps are actually flat, in fact, I am fully terrified about how much hill climbing we’re going to have to do when we get to the Alps.  What’s concerning is what Ryan says about cycling through France…you guessed it, “it’s mostly flat”.  That and “it’s down hill all the way”.

As if the distance and having to cycle for 16 days wasn’t a challenge enough, we also have hills to contend with.  In addition to hills, we have Alpine passes to contend with.  As more of a ‘coasting downhill’ kind of girl I have always known that the hills were going to be my biggest uphill struggle (see what I did there).

My inability to get up hills without dying was brought into sharp focus on our training session last weekend when Megan The Demon Hill Climber was unleashed upon us.  I was incredibly impressed with Megan’s ability, not simply to get up the hills in one piece, but to attack them with all the vigour of a starving man at a buffet (apologies I couldn’t think of a better analogy).  I really struggled to get up the hills last weekend and although I made it up most of them without needing to walk (see above photo for evidence of my only failure) the effort made me so tired the next day I couldn’t have done that 70 miles again.

With this new knowledge in mind I decided I need to do more hill training, which is where living in North Wales would have come in handy.  Unfortunately I live in Oxford where there are a lot fewer hills and most of them slight inclines compared to what I need.  Thankfully Ryan has gone skiing for two weeks which meant I could kidnap his turbo trainer and bring it back to Oxford with me.

Today I sacrificed going on a long cycle ride to have a shorter session indoors.  In order to simulate the hot Alpine summer temperatures I turned the heat up and kept the windows closed, sweating my way through an hour of turbo training.  I downloaded a really basic app which allowed me to set interval timers and alternated between 5 minutes of easy to medium cycling and 5 minutes of steep hill.

I absolutely loved this training session and I think I got more benefit out of it then I would have cycling around town desperately trying to find a hill.  Some highlights were:

– I wasn’t allowed to coast down hill and had to keep up the pedalling and intensity even when I turned down the resistance.

– I tried to keep peddling continuously for an hour which was great psychological training for me as I’m really good at coasting wherever possible.

– I could practise standing up cycling and balancing one-handed without any real threat I was going to fall off and injure myself.

– I could also practise removing the water bottle from the holder whilst pedalling, not something I think I’ve ever done before.

Overall I can conclude from today’s training that I need to get myself a turbo trainer (or convince Ryan he’s lost his and not lent it to me).  I was expecting to be able to do a long stint on the trainer today but in actual fact it’s so exhausting that I think 1 hour on the bike was equivalent to 3 hours or more outdoors.  Because of this I wish I’d done a hill session a few times during the week and gone on an all day ride today, but it was still incredibly beneficial and I learnt a lot.