So I could write a bit of a post rehashing the events of last weekend and adding to Jen’s disaster list that I *almost* destroyed my iPhone by putting it in my jacket pocket while it was 1/2 full of water (cheers Isle of Wight Freelander driver who aimed for that puddle!), but this evening’s sunshine has pushed all thoughts of winter, wind and rain from my mind.

It’s hard to believe that only two weeks ago Llyn Ogwen was frozen and half of Snowdonia was snowbound when I spent this evening on the driveway fitting a new chain and giving the bike a good bit of TLC. The weather looks good for tomorrow, a little cloudy but with almost no wind. Perfect conditions for a long ride down the coast.

The first thing to deal with was fitting the new chain. The Shimano chain which came with the bike has seen over 3000 miles and is starting to look a bit worn. By taking a tape measure and measuring 12″ of chain it’s possible to see roughly how worn the chain is. Measuring from the center of the first pin, as the chain wears the nearest pin to 12″ moves slightly further away. It seems to be generally advised that if it’s over 1/16th of an inch further to the center of the pin it’s time to replace the cassette and the chain. Mine was just under 1/16th, so a new chain should do (phew, those Ultegra cassettes aren’t cheap!). 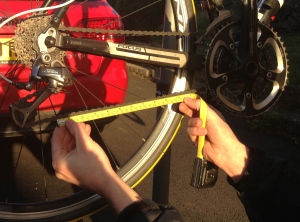 The downside to winter riding is that it takes a toll on your kit. Inspecting the bike after the chain was fitted I noticed that the headset and bottom bracket both need replacing. Definitely a job for another day!

Now that summer’s here* I’m feeling much more excited about getting out on the road. Everything’s much more pleasant when you can stop for ice cream every hour!

* Summer in North Wales is traditionally 2 weeks in March, then back to rain until winter…