On Sunday Ryan and I woke up at 7am to set off to cycle to Rochdale and back , and get back home in time for our family roast dinner at 4pm . This was more than enough time for Ryan obviously , but factoring in my navigational skills, a few wrong turns and some initial screaming and nervous yelps on roundabouts it ended up taking us roughly 6 hours .

The route was pretty decent for the first 20 miles , heading along the cycle way, however once into Calderdale the standards of the cycle routes quickly deteriorate . Lots of potholes and cobbled pathways under bridges about a meter wide … Twice Ryan was convinced I was falling into the canal .
To which he said :
‘ I don’t know whether I’d rush you help you out or actually take a photo first ‘
I know what he would do .

Along the way we were met by lots of wonderfully considerate pedestrians , other cyclists, as it was a popular cycle route, and also some crazy dogs that threatened to dart across your path at any moment . A loose boxer dog at the edge of the canal is really quite intimidating .
What’s even more intimidating is cycling past a new mother goose and her ducklings … We had some very over protective, angry geese hissing at us as we went past . 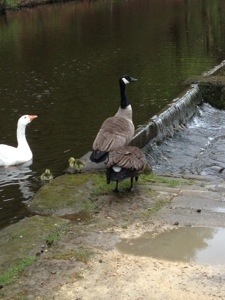 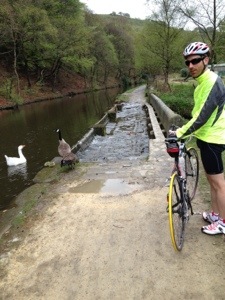 The rainy , muddy cycle ways were also a hindrance on our average speed and timings . Along the canal at one point we were getting off the bikes every 3 minutes to carry them over running water . ( Ryan has photos in sure he’ll blog them).
This , ofcourse, made me very muddy … As my wheels were kicking up a load of mud and water up my back and legs. 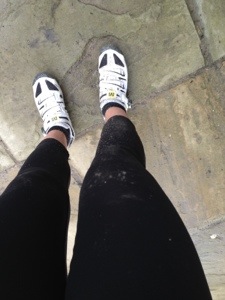 Overall , it was a successful ride , considering the 55 miles ended with a steep uphill climb for 2.5 miles . Ryan said that I climbed it at a consistently faster pace compared to last time and I now feel my confidence building back up after last weeks badger of a ride.

In preparation for Wednesday’s 77 miles ride down to Nottingham I have purchased a Topeak handlebar IPhone dry bag . So this is the view my iPhone has on long journeys :