At the weekend I managed to get out for a ride on both days. On Saturday I set out at about 1pm with the aim to go to Huddersfield and back. Using the national cycle routes, I made my way down towards Mirfield and then onto Huddersfield. The weather was lovely but one downside has to be the sheer amount of greenflies in the air. Cycling on green, thick wooded routes means clouds and clouds of them….so high speeds are difficult when it is imperative that you keep your mouth closed! I dread to think how many I ate / squished / inhaled.

Despite the creepy crawlies I maintained a good average speed of about 12 and completed the 25 mile roundtrip in 2 and a half hours, stopping for a little snack here and there. 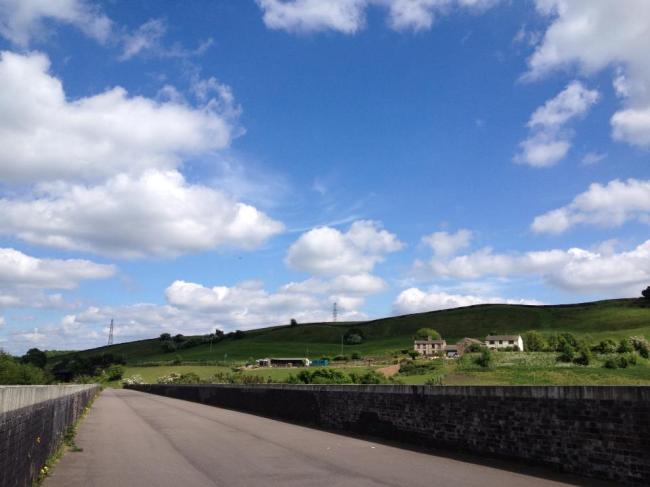 On Sunday I did a longer ride, setting off at about 12pm I headed out towards Haworth. I have fond memories of a primary school residential to Haworth, and thought it would be a nice destination for lunch. The round trip would be 40 miles, to Haworth and back. 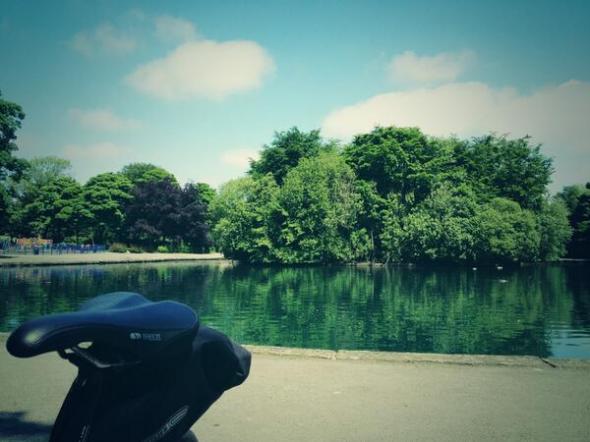 The route was fantastic. I cycled through a couple of lovely parks with cycle paths in great condition, some grim A-roads in horrific condition and some extremely fast main roads with maniac drivers trying to cosy up to me.

The first leg of the ride was out towards Thornton, near Bradford and it is without a doubt the prettiest place I have ever cycled through in West Yorkshire. 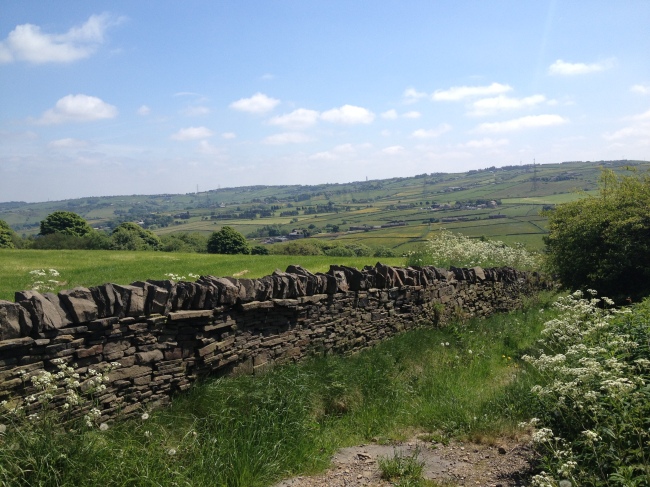 Rolling green hills and endless fields with horses in, the roads were great to cycle on and navigate through. At one point the beauty of the place was however too much, as I had to walk my bike through Thornton’s very own “secret garden”.

(The small blue patch is the path opening!)

At one point I had to stop at take a photo of the hill I was about to climb. When I reached the top, the descent actually had a (albeit small) hairpin bend. Although it took me by surprise, I did manage to stay on my bike and keep to my side of the road.

About 5 minutes away from Haworth I reached a T-junction onto the A629 and turned left, thinking “yes, turn left here and I’ll be in Haworth in no longer than 5 minutes”. 15 minutes, a 34 mph descent and two towns later I thought “I should really stop and check the map,because I should really be in Haworth by now”.  Turns out I should’ve turned Right, not left, and I was now in fact in Halifax not Haworth. Change of plan.

After checking the map and finding a route back home again, I finally ate some food. Having missed my Haworth target, I was seriously peckish and needed some energy. The next few roads were horrible in and around Halifax. Cobbled, narrow, steep roads that were difficult to navigate and impossible to cycle down.

I had a wonderful welcome to one particular cobbled hill. Upon turning into the street another cyclist was exiting as I was entering. I said a friendly “Alright there” and smiled optimistically, to which he just replied: “you won’t be at the top of that”. I soon saw what he  was referring to, the mammoth cobbled hill ahead of me. The hill was so mean, my legs actually came to a stop and I only just unclipped in time. Thankfully, I wasn’t the only one to admit defeat; I had to take a cheeky snap of the cyclist further on infront of me walking his bike up the hill too.

So a few steep climbs later I emerged on another a-road that would take me back home. Sundays route actually proved to be the most physically challenging route I have ever done by myself. The uphill climbs were really hard going and maintaining a good speed downhill helped build up my confidence. A pretty good training weekend overall.

Kerry came over for the weekend too, so being out for rides meant I didn’t get to spend that much time with her. However, I came home from work on Monday evening to find her and dad in the driveway painting the bike trailer for the trip!!

Impressed doesn’t even cover it. They’d stenciled on the logos of our charities and the name and website for Team Pedal. So when I got home we got the paint out and set out on finishing the trailer that evening! The finished result is pretty exciting, and the trip feels very very real now, and soon.  3 and a half weeks to go ! 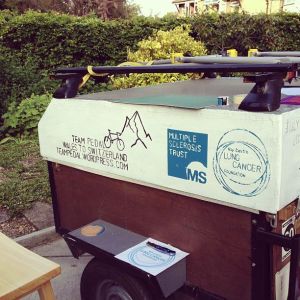 Me and Dad are responsible for the Calais – Basel section of the expedition so that evening we got cracking on mapping routes through France, and the overall route is coming along nicely !

I was planning on going to Wales this Sunday, driving down Saturday night after work, to fit in a last 100 mile ride before our trip. However, It turns out I have to work Sunday and there’s no way of covering it … so I’m pretty disappointed.  This also means that I only have one day off this week, so Thursday will have to be VERY productive.