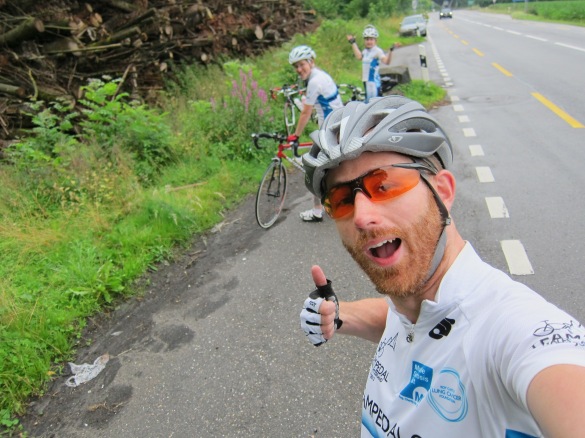 Enthusiastic after a wet start

Today we cycled from Bern to Interlaken. We woke at 6:30 to cups of tea and the sound of rain. A quick check of the weather forecast revealed a mixed bag. One forecast said it would be light rain today and then thunderstorms for the next two days. yr.no said it would be thunderstorms today, improving for the next couple of days. This left us with a bit of a gamble: do we risk poor weather and do a half day to Interlaken, or push on and attempt the bigggest day of the trip? In the end we opted for a shorter day because Jen’s knees started to play up again.

The ride out of Bern was fairly pleasant. By the time we’d got kitted up and set off it had stopped raining, and pottering around at 12mph wasn’t fast enough to kick up all the standing water. Although we didn’t see the sun for the entire ride, it was a nice change to be cycling in 21 degrees rather than 30. Limiting the ride to just over 30 miles also meant we only needed to stop once for food.

Entering the Bernese Oberland, our first proper glimpse of the alps

We were supposed to do 32 miles, but a minor detour in Thun took us to a crossing… a rowing boat crossing. Turn around, back into Thun and cross to the right side of the river before pressing on.

The northern side of Thunersee lake is great terrain to ride. There were one or two too many lorries, but gently climbing and descending meant the views were constantly changing.

Around the northern side of Thunersee, 8 miles from Interlaken

We arrived at Manor Farm campsite before 12:00, the earliest finish of the trip. This campsite has by far the most convoluted pricing system I’ve ever seen, and every pitch has a different price. After setting up we went for a quick swim in the lake before settling in for some last minute photos of the passes to come to get Megan and Jen excited!

The local weather forecast is now that the storms are likely to come in the evenings, so we need an early start tomorrow. This has the added advantage of getting as far as possible in the cool of the morning if the sun does come out.

Descending down to Interlaken, looking forward to a swim in the lake 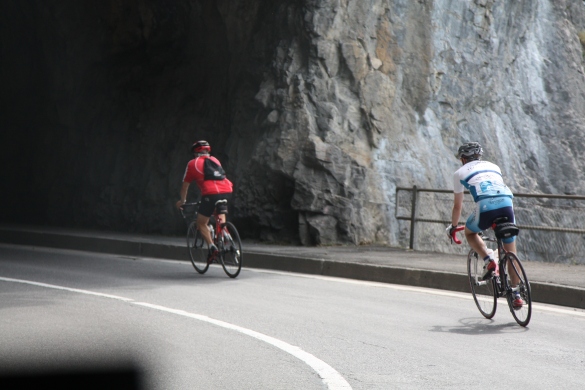 Looking out over Around the northern side of Thunersee, towards Interlaken