Team Pedal, complete and in Dover

We’re in France! We weren’t lucky enough to have internet last night so here’s the progress from the past couple of days. Jen and Megan have finally made way for me to write an update, so grab yourself some hot chocolate and settle in for the long haul.

Yesterday was day 5, and the second big day in a row since Jen’s knee went. Things didn’t start particularly well when I realised the route I’d painstakingly planned in on the laptop hadn’t been transferred to the GPS, so I had to organise a new route hunched over the 3″ GPS display. After leaving Blacklands campsite (http://www.blacklandsfarm.co.uk/) (who generously donated to the team and had great facilities) we made a good pace, and our slightly-before-mid-point of Tunbridge Wells drew closer and closer. The route through Sussex and Kent has been picturesque, and it’s a shame we couldn’t spend longer touring around the back roads and checking out the many sights we had to shoot past, but we are on a mission so there’s no time to lose.

We met the support team in Tunbridge Wells and stocked up on suncream and water, as well as giving Jen’s knee a much-needed ice session. While sat at a set of traffic lights someone from a couple of cars back had dashed up to our car, thrust in £20 and said “Good luck!”. There have been so many incidents like this that it’s been a really great experience travelling through the UK and we’ve all been blown away by the support we’ve seen.

Jen pushing on near Folkstone

Unfortunately our day took a turn for the worse, and with around 40 miles to go Jen’s knee went on the pain scale from 2 (out of 10) to 8. We were about 3/4 of the way up our second major hill climb, which apparantly gets used for the Tour de France, so limped off the side of the road and took refuge outside the Green Cross Inn (URL). We owe them a pint or two because as soon as we arrived they offered a bag of ice and a teatowel, and didn’t mind at all that we were obviously cheapskate cyclists with our own food. Dad and Chris arrived a couple of minutes later with more Voltarol gel and some giant ibuprofen. When the pain had subsided a little we pushed on, but made (literally) painfully slow progress until 3 miles out of Folkstone when Jen’s knee gave up for the day and brought us to a grinding halt. Anyone struggling to choose who to sponsor should definitely pick Jen (http://www.justgiving.com/Jen-Gallagher1) who’s not just having to do a huge distance each day but is also going through a fair amount of hardship at the same time. 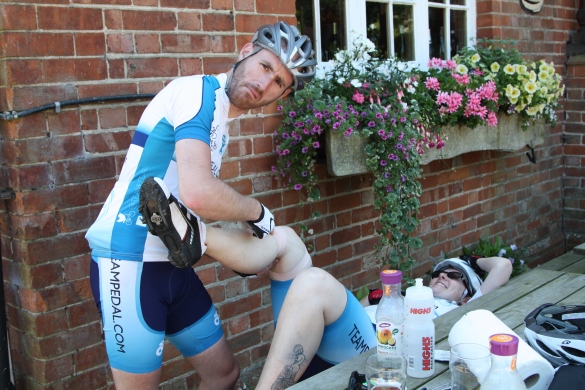 Day 6 has been much easier, and we had time to meet up with Barry, a family friend and who works for Dover Community Radio (http://www.dovercommunityradio.co.uk/). We got a couple of great team photos and a quick radio interview, as well as a long overdue catch up.

We did cheat a little here, and had to jump in the car to get through customs and onto the ferry. We had intended to cycle those 500m, but thought an extra £90 was a little extortionate for such a short distance. We’ll make it up by making a wrong turn somewhere!

Cycling to our current campsite near St Omer was an absolute pleasure. With less than 200m of height gain it was a welcome relief to Jen and we made the campsite in good time, ready for an afternoon off. I did find that leading the group around Calais I was constantly second guessing myself. Am I on the right side of the road? Is this guy going to give way to me? Am I going the wrong way down a one-way street? Once we hit the countryside I was much more relaxed and settled in to a gentle pace. So far French drivers have given us a good wide berth even on busy roads. Maybe it’s a good thing we’ve got English text all over our cycling lycra – everyone just assumes we have no idea what we’re doing and steers clear!

Cycle on the right…

So we’re now 408 miles into the trip, with roughly 680 to go. We have climbed around 1500m most days, totalling 6742m, and have cycled for approximately 55 hours (including stops). With the exception of our start in North Wales it’s been brilliant sun and clear skies, and we’ve cycled through the hottest day of 2013 so far. Fortunately noone’s burned, and we’re building up some excellent (read: ridiculous) tans. So far we’ve had 3 punctures (so far Jen is winning the “best deflation sound” award) and I’m turning them around in under 5 minutes. It was definitely worth the practice.

Pretty much every update we write needs to have a huge thanks to the support team. Chris and Dad have worked tirelessly to make and break camp, keep us fed and watered, shadow us taking pictures and being on hand for emergency calls when injuries need tending to. When they volunteered I’m sure they were under the impression that they’d have hours to kill and could go off on little adventures. Little did they realise they’d be working harder than us!

Tonight we sit here optimistic. There are hurdles ahead and we’re at the behest of Jen’s knee, but the hills for the next couple of days are likely to be fewer and gentler. We have two big days (80-100 miles each) before our next half day.